Posted on June 4, 2014 by Patterson
Error: Unable to create directory uploads/2022/11. Is its parent directory writable by the server?

When we got started in genomics 3 years ago, I wrote an essay in the New York Times that computer scientists have a lot to bring to the fight deadly diseases like cancer. (This hypothesis was not universally heralded by everyone in all fields.)

The good news we have already had a success of using SNAP for infectious disease to help save a life.

There are a number of patients in the hospital with undiagnosed inflammatory reactions and infectious symptoms who have no identifiable source using existing tests. A generic test to identify all organisms using RNA sequencing has been developed and is being piloted by Dr. Charles Chiu at UCSF. SNAP is critical to the implementation of this test, since it rapidly filters all human sequence from the large resulting datasets (up to 100 million sequences), enabling the identification of pathogenic sequence within a small enough time to effectively treat patients. In the US 20,000 people, mostly children, are hospitalized each year with brain-swelling encephalitis, and 60% of the time doctors never find the cause, which can lead to serious consequences. 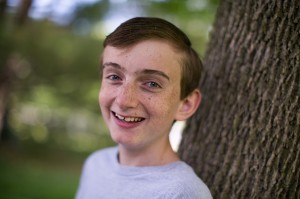 Joshua Osborn, now 15, outside his home in Cottage Grove, Wis

This tool was recently used to successfully diagnose and treat a Joshua Osborn, a teenager with severe combined immunodeficiency who lives in Wisconsin. He went to hospital repeatedly, and was eventually hospitalized for 5 weeks without successful diagnosis. He developed brain seizures, so he was placed in a medically induced coma. In desperation, they asked his parents to try one more experimental test. His parents agreed, so they sampled his spinal fluid and sent it to UCSF for sequencing and analysis.

The speed and accuracy of SNAP helped UCSF to quickly filter out the human reads. In just 2 days they identified a rare infectious bacterium, which was only 0.02% of the original 3M reads. The boy was then treated with antibiotics for 10 days; he awoke and was discharged from the hospital 4 weeks later. Although our software is only part of this process, without SNAP it would not be possible to perform a general infectious disease test like this without first guessing the causative agent. That’s why tests such as this are not yet more broadly available.

Quoting from the UCSF press release, referring indirectly in part to the speed and accuracy of SNAP:

“This analysis of DNA sequences required just 96 minutes. A similar analysis conducted with the use of previous generations of computational software on the same hardware platform would have taken 24 hours or more to complete,” Chiu said.

The abstract and last paragraph from the NEJM article tells the story with more medical accuracy and brevity:

A 14-year-old boy with severe combined immunodeficiency presented three times to a medical facility over a period of 4 months with fever and headache that progressed to hydrocephalus and status epilepticus necessitating a medically induced coma. Diagnostic workup including brain biopsy was unrevealing. Unbiased next-generation sequencing of the cerebrospinal fluid identified 475 of 3,063,784 sequence reads (0.016%) corresponding to leptospira infection. Clinical assays for leptospirosis were negative. Targeted antimicrobial agents were administered, and the patient was discharged home 32 days later with a status close to his premorbid condition. Polymerase-chain-reaction (PCR) and serologic testing at the Centers for Disease Control and Prevention (CDC) subsequently confirmed evidence of Leptospira santarosai infection.

… In summary, unbiased next-generation sequencing coupled with a rapid bioinformatics pipeline provided a clinically actionable diagnosis of a specific infectious disease from an uncommon pathogen that eluded conventional testing for months after the initial presentation. This approach thus facilitated the use of targeted and efficacious antimicrobial therapy.

In a separate communication with Chiu he said that in the United States, there are about 15,000 cases a year of brain-swelling encephalitis with 2,000 deaths, and >70% of the deaths underdiagnosed. Assuming doctors are able to obtain actionable diagnoses from the information, SNAP plus the software developed at UCSF to identify the non-human reads (SUPRI) could potentially save the lives hundreds of encephalitis patients annually just in the US. Worldwide, encephalitis is a huge problem; there are probably about 70,000 diagnosed cases a year with 25,000 deaths. Even 25,000 is certainly a gross underestimate because most cases worldwide are in rural areas and do not receive hospital care.

Here are links to